Lucie and the Perfect Wave (Band)

Lucie and the Perfect Wave (Band) 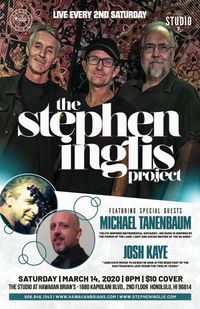 I'll be a special guest for this event. https://hbsocialclub.com/event/the-stephen-inglis-project-ft-michael-tanenbaum-josh-kaye/

He's an innovative composer/guitarist of instrumental music that can be described as visual "Guitar Tapestries" - music you can SEE. Storytelling for him takes the form of acoustic journeys through changing landscapes. His major guitar influences include: Bruce Cockburn, Michael Hedges, Leo Kottke, Don Ross, Alex De Grassi, Pat Metheny, Franco Morone and Makana.

For guitar performance and composition, he placed among the top 5 finalists in the 2009 Fingerstyle Guitar Competition at the Canadian Guitar Festival in Kingston, Ontario Canada. In the same year, his Big Island inspired tune "Road To Waimea" was nominated for Best World song at this year's New Music Awards in the Barrie New Music Festival in Canada.

In 2003 Michael won a silver medal for original composition in the World Championships of the Performing Arts in Los Angeles - an Olympic style competition among musicians from around the world.

Michael graduated from Brown University where he was first introduced to computer and electronic music. Since then, his fascination with all things acoustic and digital has led him to bring those two worlds together in a variety of engaging ways. From live performance art to intricate studio work, the elegant union of these different worlds is his life work.